In the days following the Taliban’s swift conquest of Afghanistan, a disturbing narrative took hold of the Left: the Taliban and the GOP are the same.

Some posters have hundreds of thousands of followers and their posts have been shared thousands and thousands of times reaching potentially millions.

This comparison is irresponsible.

Americans have never had to flee their country. American women, like my wife, are free to pursue any profession and travel on their own. American children are not being conscripted to fight a war.

But none of that reality matters once a narrative takes flight —especially on social media; it becomes extremely difficult to change.

I would know. I do this for a living in Texas. Over the past two years I’ve been a digital strategist helping non-profits and political campaigns shape narratives around key issues like voting rights, abortion rights, and COVID-19. I’ve devised and executed digital mass communications campaigns using every medium from email to social media ads to relational organizing tools. Through my campaigns I’ve reached millions of Texans.

I can understand the impulse to attack one’s political enemies, but during this crisis of our own making, political rhetoric cannot trump human needs. Millions of Afghans, including friends of mine, depend on us focusing on lending aid and not getting distracted by partisan squabbles.

When I first heard about Afghanistan falling, my heart sank. I have friends in Afghanistan. One was a high-ranking member of the Afghan government. It took some time, but I heard back: “We are well at the moment, keeping low profile and trying to find a way out.” I haven’t heard back from him since and I can only hope that he and his family have made it out.

If you’re in Afghanistan right now, things are frightening.

Despite assurances that the new Taliban would be more moderate and give women political franchise, their new government is all-male and elevated hardliners to key posts. They’ve been terrorizing you for decades and crushed the only resistance forces. If you assisted the United States, you’re in immediate danger. Your “allies” have abandoned you without a plan.

As the new government takes hold, Afghan women are rising up: “We decided to protest to demand our basic rights: the right to education, to work, and political participation. We want the Taliban to know that they cannot eliminate us from society.”

The Taliban responded to the rally by sending fighters out to attack the protesters.

Amnesty International recently released a report detailing a massacre of nine Hazara men that occurred after the Taliban occupied the Ghazni province. The eyewitness testimony is harrowing: “Six of the men were shot and three were tortured to death, including one man who was strangled with his own scarf and had his arm muscles sliced off.” Amnesty International is so concerned about the current situation that they’ve called on the international community to protect the thousands of Afghans who are at serious risk of reprisal from the Taliban.

The situation is horrifying, and Americans need to be focused on one thing – how do we help the people our government abandoned. Otherwise we risk the grave moral injury of betraying the promises we made to thousands of Afghans who risked their life as our allies during the war.

Right now there are almost 4 million Afghans filling internal refugee camps. Their numbers grow by the day as men, women, and children flee the Taliban. These people need our help. COVID-19 is spreading like wildfire and they need urgent access to medical care and water.

Americans need to step up. I urge you to contribute to the International Rescue Committee. They are a phenomenal organization that has been with the Afghan people since the Soviet invasion, providing millions of people with shelter, education, clean water, health support and other aid, and we will stay as long as we are needed.

We can’t turn back time, but we can make sure that going forward, our brothers and sisters in Afghanistan are supported. 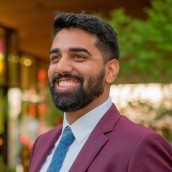 Saatvik Ahluwalia is a Digital Strategist at Progress Texas and Austin Asian Civic Communities Coalition. He is also a Public Voices Fellow of the OpEd Project. The opinions expressed in this commentary are solely his own.

Who Can Serve on Boards?

Every Tenth of a Degree of Warming Matters