Can we fix the college admissions process?

“Hopefully, this has an effect. Hopefully, we’ll see more minorities, especially in the USA, getting out and trying these winter sports.”  Olympic gold medalist Erin Jackson expressed these sentiments after winning the 500-meter speedskating race, becoming the first Black woman in history to receive a medal in speedskating in the Winter Olympics.

Her victory may inspire other African Americans to take interest in winter sports, but that would require more media attention on such athletes and dispelling long-held stereotypes about Black people and cold weather sports.

With the lighting of the Olympic torch at the iconic “Bird’s Nest” National Stadium in Beijing, China on February 4th, Beijing became the only venue to host both the Summer and Winter Olympics with a Winter Games slogan of “together for a shared future.” It  also had the distinction of being the most gender balanced Olympic Winter Games to date with 55% of athletes being male and 45% female showcasing countless examples of mind-boggling speed, endurance and agility. While representation along gender lines has shown significant improvement, progress has been less apparent when it comes to minorities, with a continued paucity of Black athletes in the Winter Games. At the Pyeongchang, South Korea Winter Olympics in 2018, only 1.45% of the 3,000 athletes participating were Black. This trend continued with the recently concluded 2022 Winter games. Multiple factors contribute to this statistic including low numbers of Black people in some of the competing countries and the higher cost of equipment, travel and coaching associated with winter sports. But there is also the fact that there is lower interest and participation by the Black population because they don’t see others like themselves being involved in such sports. This perpetuates stereotypical phrases such as “Black people don’t like the cold.”

Had Erin Jackson, a native of Ocala, Florida, believed in that she probably would not have made the move from in-line skating to speedskating on ice and become a top-ranked skater at 500 meters . More media coverage on such athletes as well as athletes from other countries like Nigeria and Ghana—who made their debut in 2018  — would serve to provide more exposure of Black athletes to these sports.

When the Jamaican Bobsled team burst onto the scene at the 1988 Winter Olympic games, it proved to be one of the most talked about occurrences in the history of the games. This inspired the 1993 movie “Cool Runnings,” which captured both the “absurdity” and the essence of the ambition of the athletes. 1988 was also the first year that an African American athlete, Debi Thomas won a medal, winning the bronze in figure skating.

Thirty years later, at the 2018 Winter Olympic games, non-white athletes (10 black Olympians and 11 Asian-American Olympians) accounted for slightly less than 9 percent of the American team, according to team data.

Despite the continued under-representation of Black athletes, some progress has been made. There is a slow but steady increase in participation from the Black community giving rise to accomplishments  by  notable Black athletes like Shani Davis, the first African American to win a gold medal in individual competition, and Bobsledder Elana Meyers Taylor who made history at the recently concluded  games by becoming the most decorated Black athlete in Winter Olympics and also the most decorated female Olympic Bobsledder.

On the other hand, Black athletes are by no means an unusual sight in the Summer Olympics. According to reports, black athletes made up 23 percent of the US team that competed at the 2016 Summer Olympics in Rio de Janeiro and have shown dominance in certain sports such as track and field. Since the first Black participant in 1900, a Haitian by the name of Constantin Henriquez, who won a gold medal in the 1900 Olympic rugby tournament as a part of the French team, barriers continue to be broken. In more recent times, participation in sports such as swimming, diving and gymnastics have given rise to now familiar names like Simone Manuel and Simone Biles, whose successes were preceded by trailblazing Black athletes who defied stereotypical narratives.

These stereotypical thoughts are not only present at an elite level of athletics, but also spill over into the recreational arena. As a runner, I am often struck by the low numbers of Black participants in races or even in run clubs. Running USA’s biannual National Runner Survey of almost 12,000 respondents between January and May of 2011, revealed only 1.6% of marathon runners in America are African American. But even at less taxing distances, Black participation remains low and the phrase “Black people don’t run” is still perpetuated. The organizations Black Girls Run and Black Men Run have tried to counter this notion by their very names and strive to normalize participation of the Black community. The New York Road Runners encourages diversity in running through programs in public schools. Other avenues such as increased representation in the media would also facilitate greater visibility of Black people engaging in physical activity.

Analysis of National Surveillance data showed that only 24-36% of Black adults report regular physical activity, which is highest among men, younger age groups, highest education and income groups, employed and married, overweight (but not obese men), and normal-weight women.

The consequences of insufficient leisure time physical activity are far reaching and consequential, being linked to heart disease and its risk factors of obesity, hypertension, high cholesterol as well as breast and prostate cancer, falls, dementia and depression.

Studies show that physical inactivity is associated with a 14% increase in the co-existence of two or more chronic diseases (multimorbidity), and others show that any increase in activity will reduce the risk of adverse health outcomes and mortality. Black middle-aged adults have chronic disease burden and multimorbidity, which occurs four years earlier than their white counterparts.

Visibility, motivation, opportunity, and education will play a huge role in overcoming the barriers, stereotypes and blind adherence to cultural norms associated with the Black community at the elite and recreational levels. Representation, by increasing potential avenues available to the Black community, has a role to play in improving the long-term consequences of physical inactivity, which are particularly problematic for Black people.

Meanwhile, the Jamaican Bobsled team once again made history having participated in three events at the Beijing Winter Olympics including a four-man team, for the first time in 24 years, as well as adding their first Alpine skier to their team. 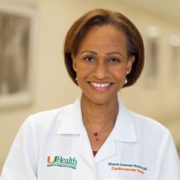 Sharon Andrade-Bucknor, MD, FACC is an Assistant Professor of Medicine, Medical Director of the Cardiac Rehabilitation at the University of Miami, and a Public Voices Fellow of the OpEd Project.