My entire intermediate family, ages 30 – 79, is considered high risk in this pandemic.

As the Omicron variant heightens concern over spikes of COVID-19– one of the most significant pandemics globally in over 100 years– Black Americans are most affected. So many reasons contribute to this, but the main indication is the range of disparities we face from economic, health, social, educational to racial justice, and so many more.

The biggest question is how Black Americans can compete against these systems? And next is what can change this?

Historically, Black Americans have dealt with discrimination for many decades. Experiences like the Tuskegee Syphilis Experiment, Henrietta Lacks, and lack of access to simple healthcare during slavery have fueled ongoing mistrust in the healthcare field.

Mistrust has been a coping mechanism for many Black Americans so closing the equity gap is not simple. Mistrust places people in a box, feeling trapped within the healthcare system. But it has become comfortable and familiar after all the years of inequities. So, vaccine hesitancy is not a surprise among Black Americans amid an active pandemic.

Black Americans have had the highest disparity gap in every disease area. This is common knowledge; at least since 1985, the same concerns are prevalent in 2021.

Slave-based medicine is still foundational in teachings today, stating that Black Americans have different lung capacity, kidney function, or pain tolerance because of race. These “differences” were established by small sampled research studies that didn’t consist of enough Blacks to determine certainty.

Because of this, race is automatically accounted for in making health decisions. However, many have been speaking out to remove these racist and biased algorithms in medicine so Black Americans can finally receive better care.

Healthcare institutions like Rush University Medical Center (where I am Medical Education Coordinator) have already begun to change by removing race from the kidney function equation levels.

It is a fact that Black Americans have more trust in those in their race. Whether family or professionals, they relate to those of their own. Because of this, more Black healthcare providers need to connect to their Black patients. This is not just about physicians, all of healthcare need more Black Americans. Fewer than 10% of Black Americans work in higher-level careers.

This is why I founded the Minority White Coat Foundation. The various healthcare fields are difficult to navigate through as a minority, especially without the proper support. The “appropriate” steps to becoming a physician are not as straightforward for minorities students. The foundation’s goal is to create a sense of community among minorities who desire healthcare roles.

I am the student fighting past the barriers with the Medical College Admission Test, or MCAT, for acceptance into medical school. I am also the student who recognizes the lack of minority physicians, limiting the possibility of a mentor who looks like me to follow on the path and answer my questions.

For the last 10 years, many in the U.S. have complained and warned about the shortage of physicians. Yet, minorities like myself have been trying to fill the need and gap for some years. Still, the number of minorities entering into the healthcare fields, especially men, is just not enough.

Because of the pandemic, a recent report shows healthcare workers are quitting their jobs, even in a worker shortage.

While many healthcare organizations and institutions profess social justice concerns, diversity and inclusion have become goals to address; this is not enough to increase the number of underrepresented minorities in the healthcare field. There need to be action and outcomes.

The history of standardized exams like the MCAT and admissions to medical school has not been on the side of minorities. It was a barrier to discourage and sometimes even block minorities from becoming healthcare professionals.

The lack of minority providers keeps many Black Americans feeling unheard. There are so many stories of Black Americans dying unnecessarily during childbirth. The length of maternal mortality disparities has created, for me, fear in pregnancy. I am concerned that I will not have a provider who will listen to me if I feel something out of the ordinary.

Due to the unconscious bias taught in medical education, I wonder if the doctors believe me when I say I’m in pain.  I am also concerned for the most vulnerable members of the Black community, including elders, children, or disabled persons.

Having providers of the same race provides a trusted circle and support group. A 2020 study shows that Black patients are more satisfied and display better health outcomes when minority providers treat them.

Healthcare gaps have existed for Black Americans for a long time, and individuals, institutions, organizations, and policymakers can help make a difference.

Doing my part, I envision– finally –a light at the end of the tunnel. 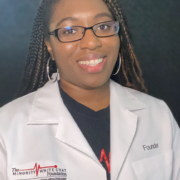 Danesha Lewis is the founder of the Minority White Coat Foundation, Medical Education Coordinator at Rush Medical College, a PhD Candidate at Rush University, and a Public Voices Fellow with The OpEd Project.