Not long after I moved to the States and got married, my husband -who is a Hollywood stuntman- booked a three-month-long job in a Western movie that was shot in New Orleans and New Mexico. I was fresh off the boat and still waiting on my working card, so I traveled with him everywhere he went.

As he worked long days on set, I stayed in our hotel alone, with no responsibilities: No job, no housewife duties, no one to look after. All I had was time, and that was my opportunity to do something I had been postponing for a while: Starting to write my first screenplay in English.

So I did what my strict self usually does when working on a project: I turned into what I like to call “Sergeant Mode.” I hid my cellphone in the closet, disconnected my computer from the WIFI, and brought out my paper-back dictionary as if it were nineteen ninety-five.

Being born and raised in Argentina, my first language is Spanish, and so, when I write in English, I second-guess myself a lot. Don’t get me wrong, as a naturally anxious person second-guessing myself is something I do on a regular basis, but this time the voices in my head were a little more aggressive than usual.

It took me a couple of days to get “in the zone,” and for me to create this micro-climate, I had to produce an effective schedule. I woke up at seven a.m., had breakfast, and then wrote for four hours in my pajamas. At one, I’d go to the hotel’s pool, and while swimming I would think about my writing: What I liked, what I wanted to change, what I needed to fix. After that, I’d make myself some lunch at our tinny long-stay-room kitchen. Back then I wasn’t a sophisticated cook, so my meals were usually quick and easy, following three variables: Chicken and a salad, soup and a salad, sandwich and a salad.

After lunch, I wrote for three more hours, then plugged into my headphones and went for a walk while listening to “The Writer Files”, a podcast that addressed secrets to productivity and creativity.

It took me around four days to get fully in “the zone” without cheating. That is: Texting, scrolling through social media until my thumb started to cramp, or reading magazine articles that didn’t bring much to the table, such as “Fourteen ways to do your hair in fourteen seconds or less”, or “Super Stars do it too!!: Twenty pictures of your favorite celebrities blowing their nose and cracking their knuckles”,

The moment I had fully reached “Sergeant Mode” and was finally happy and motivated, a phone call in the middle of the day made me lose my tranquility. It was my husband. He knew I had hidden my phone in the closet, so he was calling the hotel room’s line instead.

Whenever he calls me from work, my heart skips a beat, and the voices in my head suggest that the worse has happened: That he broke both legs and is now on his way to the hospital, that he lost an eye, or other thoughts among those lines.

Thankfully, none of the above were right this time. He was calling to tell me that his boss had found a stray dog close to set and decided to adopt it. He couldn’t bring it to work and was worried about leaving it alone all day in his hotel room. So my husband told him that I was going to take it out on several walks during the day, and now he was calling to let me know.

Did this bother me? Of course it did. What would you expect? I was in “Sargent Mode”! This was pricking my bubble.

I didn’t know my husband’s boss very well, but I had certainly heard a lot about him: He was a big-time stunt coordinator who had been in the business forever, and who my husband looked up to a lot. I must say he intimidated me a little. He hopped into our phone conversation and thanked me in advance for my generosity, and I immediately started to feel better. It was nice to feel helpful, after all. I didn’t have much experience in this field, but how difficult could it be to walk a dog?

The next morning my husband left extra early because he had a challenging stunt. He was going to be involved in a typical Western “Saloon Fight” that involved him being pushed onto a window, breaking the glass with his body and falling two stories to the ground. Not that I intend to compare myself to him, but that day he wasn’t the only one to face a challenge. I had one of my own: I was stepping out of my schedule.

After my husband left, I went to meet with the dog, who was adorable, but also huge and strong. How come he had forgotten to mention that detail? He was so tall he barely fit inside his kennel. As soon as I opened the den’s door, he jumped out and galloped towards the entrance.

“Cajun!” I called him, but he didn’t acknowledge me. He was recently named like that, so he didn’t quite grasp that was his name yet. “This is going to be interesting,” I thought to myself.

I put him on the leash, and out we went. Opposite to my typical neighborhood walks, there was nothing smooth nor relaxing about taking this big dog out, as he kept on pulling and dragging me. In order to walk him, I had to grab the leash tight with both hands. I could tell he was a good boy, but he just had zero experience walking on a leash. How could I blame him?

It was a beautiful sunny day, and while we walked, it occurred to me that I could still listen to my favorite podcast, but no. The moment I let go of one hand to take my headphones out of my purse, he pulled extra hard, and I face-planted on the floor. Cajun towed me as if I were waterskiing over the “Weekend at Bernie’s”.

As I started to chase after him, I glanced at a group of vaping teenagers who had apparently seen the whole scene, staring at me, laughing. Did I look that pathetic? As Cajun stopped to pee on a tree, I got a hold of the leash, and we walked back to the room were, with the help of treats and a push, I managed to place him back in the kennel, before heading back to my room to write.

When I sat down at my desk, the words poured out quickly. I was impressed by how well the scene I was working on was now flowing. Maybe stepping out of my comfort zone and hitting my head on the ground was what I needed to put my ideas in order? I once read about a man who woke up from a concussion knowing how to play the piano.

Later that day, I came back to the dog’s room for a second visit. I was feeling confident and victorious since I had finished my scene in record time. “This time I will tame the beast!” I thought to myself. I would walk him on a short leash. I would be in charge. Or so I thought…

I swiped the key to open the door and the light went green, but when I pushed it, it barely moved. Something was off. I looked through the room’s window and then saw it: One side of the curtain pole had fallen, blocking the door. The kennel was open, and the place was a complete wreck: Toilet paper, clothes, bedsheets, and towels were scattered everywhere. It looked like Cajun was having a full-on party in there. I tapped on the glass to get his attention, and he hardly looked at me as he was lying on the bed and chewing on the TV’s remote control, with his tail wagging.

“You didn’t close the kennel right.” Those authoritarian voices in my head were back in action. “You had ONE job, Sofia. And you couldn’t do it right.”

Then, my thoughts were suddenly interrupted by a hotel employee who walked down the hallway. He looked like he could be Latino and was wearing a uniform with a label that read “Roberto.” The signs were there, but I didn’t want to be presumptuous, so I asked him:

“Do you speak Spanish?”

When he replied, “Yes,” I exhaled in relief.

I explained what was happening to him, and he used a key to open another sneaky door to the room. All hotel rooms have sneaky doors, and that day I was thankful for that. As he entered and saw the mess, he decided to make a joke:

“You’re great. Would you babysit my kids?”

But I didn’t have time for jokes. This was a serious matter, and I was overwhelmed. What if my incompetence ended up damaging my husband’s career? I had a couple of hours before everyone came back to the hotel, and I was determined to hide the evidence. With Roberto’s help, I managed to put Cajun back in his kennel, and this time, I made sure to turn the door’s handle all the way until I heard a “click.”

“How much for a new curtain pole?” I asked Roberto.

“You’re fine. We have tons in storage.”

“And how much for a new remote control?” I added as I held what was left of one Cajun had been chewing on for hours.

“And the curtains?” I asked, pointing at the chunks of torn fabric on the floor.

Roberto left for twenty minutes and came back with a new remote control, new curtains, and a pole, and I managed to tidy up the place until there was no evidence left. 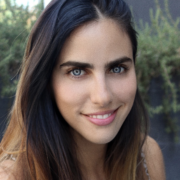 Argentine writer based in Los Angeles