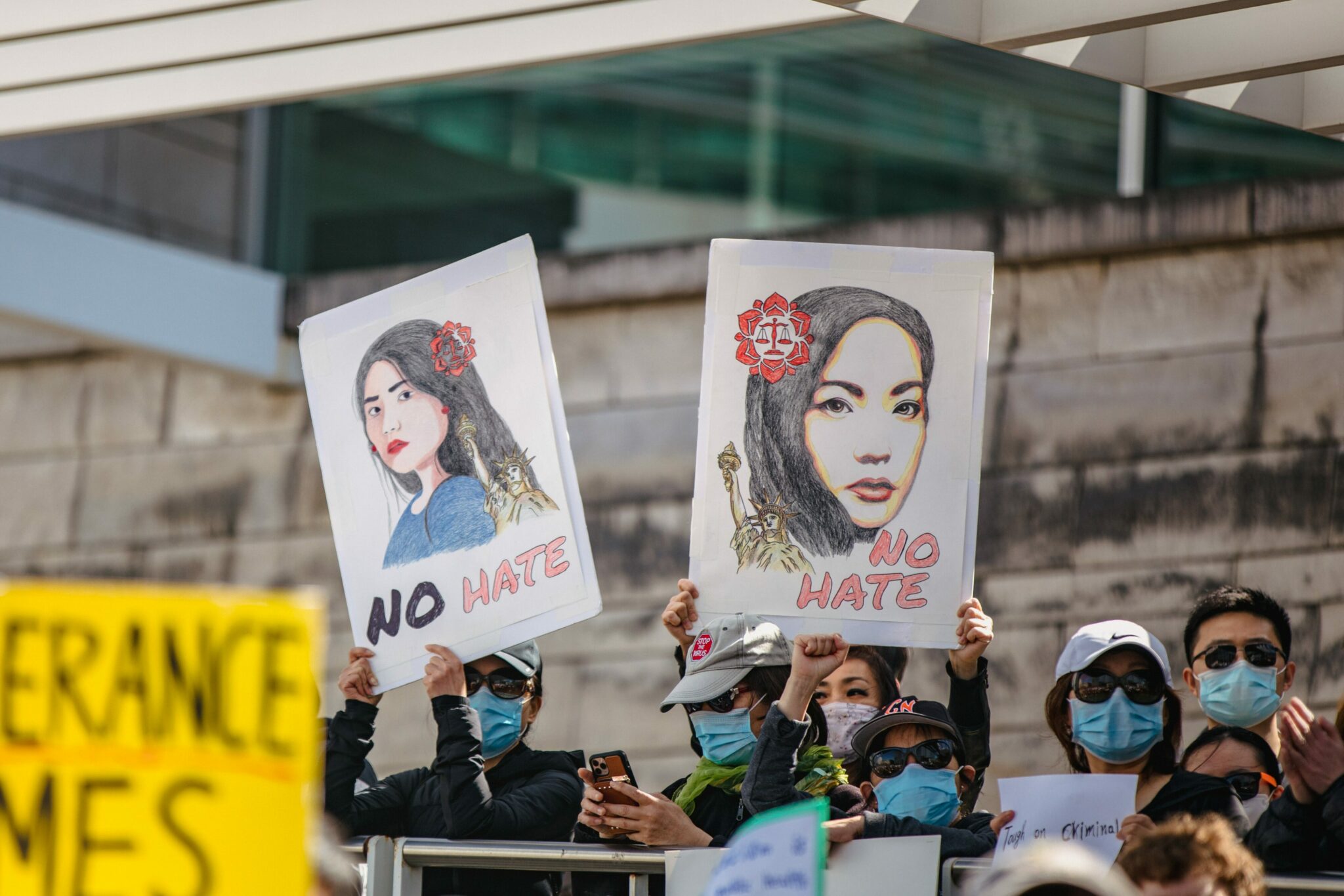 It’s May, Asian Pacific American Heritage month. As a sobering reminder, 2022 is the year of continued anti-Asian hate.

Some point to the pandemic, coupled with racist rhetoric by the former president as the source of such violence. In reality, this is simply part of a long history of hate, one that was ignited as early as 1854 when on a technicality, the California Supreme court ruled that George Hall could not be convicted of the murder of a Chinese immigrant named Ling Sing. 2022 is a landmark year which marks the one year anniversary of the Atlanta Spa Shootings.

June 19th will commemorate the 40th anniversary of the murder of Vincent Chin. The 1982 Detroit slaying was sparked when Ronald Ebens claimed that “motherf—kers” like Chin were the reason why he and so many other auto workers were out of a job. This case galvanized the Asian American community and eventually inspired hate crime legislation.

On October 17th, we observe the 30th anniversary of the shooting of Yoshihiro Hattori, a Japanese exchange student in Baton Rouge, who was murdered for simply knocking on the wrong person’s front door.

It’s suffocating to see anti-Asian hate crimes still surging like this. 1 in 6 Asian American adults experienced a hate crime or hate incident in 2021,” according to AAPI data, (an increase from 1 in 8 in 2020. Not only has the danger not gone away, but in some parts of the country, like NYC and San Francisco, it has gone worse.

Since the beginning of the pandemic, StopAAPIHate.org has reported over 11,000 hate incidents. This number does not include the myriad of stories and experiences that go unreported and completely forgotten. The recent killings of Michelle Alyssa Go and Christina Yuna Lee, along with the brutal assault of a 67-year-old woman in Yonkers who received over 125 blows to her head and body, remind us that this pattern of hate incidents will endure.

We are four fiercely angry Asian women in the United States from different ethnic backgrounds: Filipino, Korean, Chinese, and Vietnamese who recognize this long history of hate against our communities. As a nation, we can no longer be ignorant of this history. As Asian Americans, our rage can no longer be silenced. 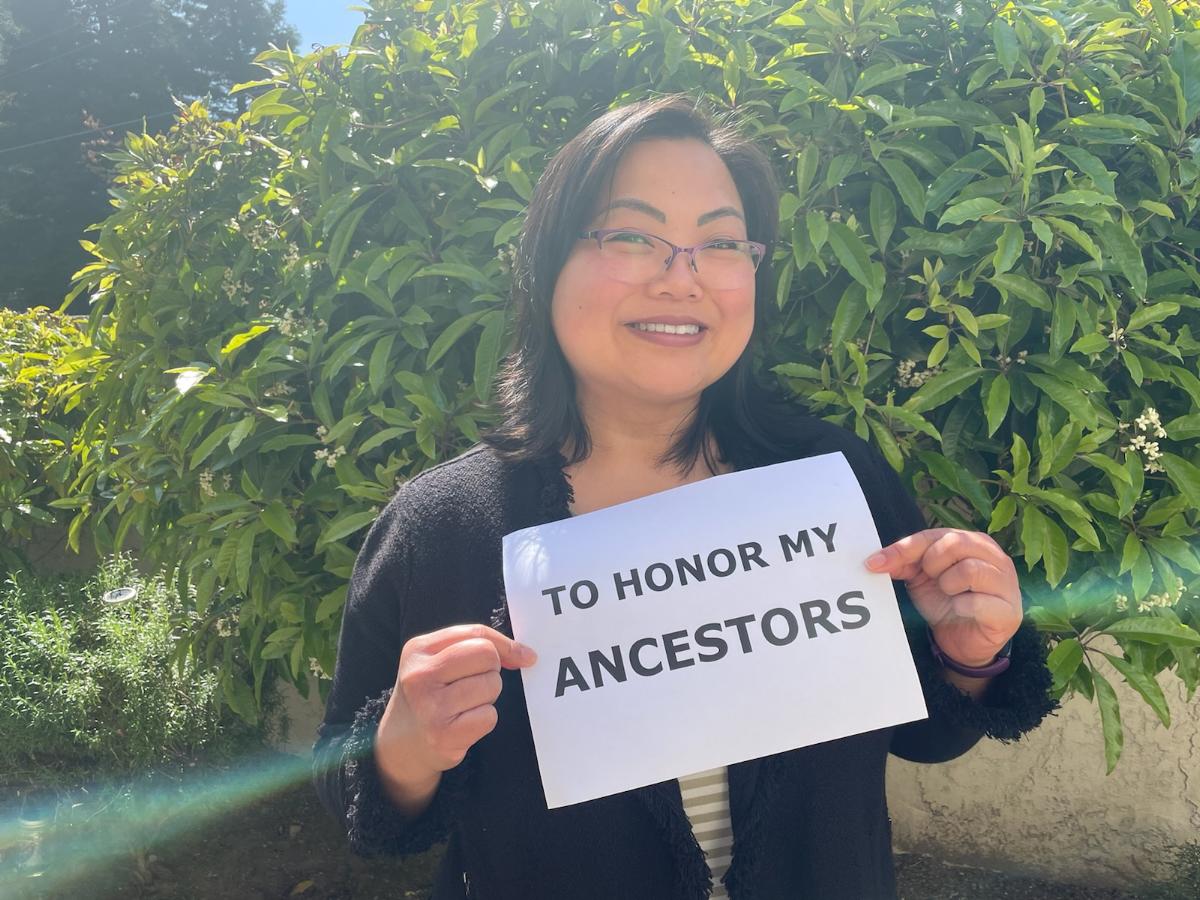 One of us lived in Palmdale, CA in 1980 when she was in kindergarten. The youngster would take her daily walk to the bus stop, located in front of the home of her father’s co-worker – the only other Filipino family in the mostly white neighborhood. Here, she would receive constant torment from fourth and fifth graders. One day, the taunting was so unbearable that she started to scream at the top of her lungs, pleading for help while rattling the metal gate of their family friend. Their eldest, a college-aged daughter, ran out, swooped the six year old, and rushed her inside the house. As soon as the bus arrived, the girl walked the kindergartener to safety. They never shared the torment with their parents. Mutually, it was understood that silence is how we protect our parents, whom we spent a lifetime watching pay what comedian Hasan Minhaj calls, the American Dream Tax: the taxes paid for the opportunities immigrants are afforded for daring to succeed in an unwelcoming country. These taxes come in the form of job discrimination, public humiliation of being othered, and the expectation to absorb physical and emotional violence that goes hand in hand with immigration. At six-years-old, she had not developed the audacity of equality. Instead, her body trained itself to temporarily mask the trauma… until repeated hate violence against her own community forced the wounds to burst open. Rage has its way of making itself known – no matter how deep we bury the trauma, and no matter how we perform agreement with inexcusable behavior. 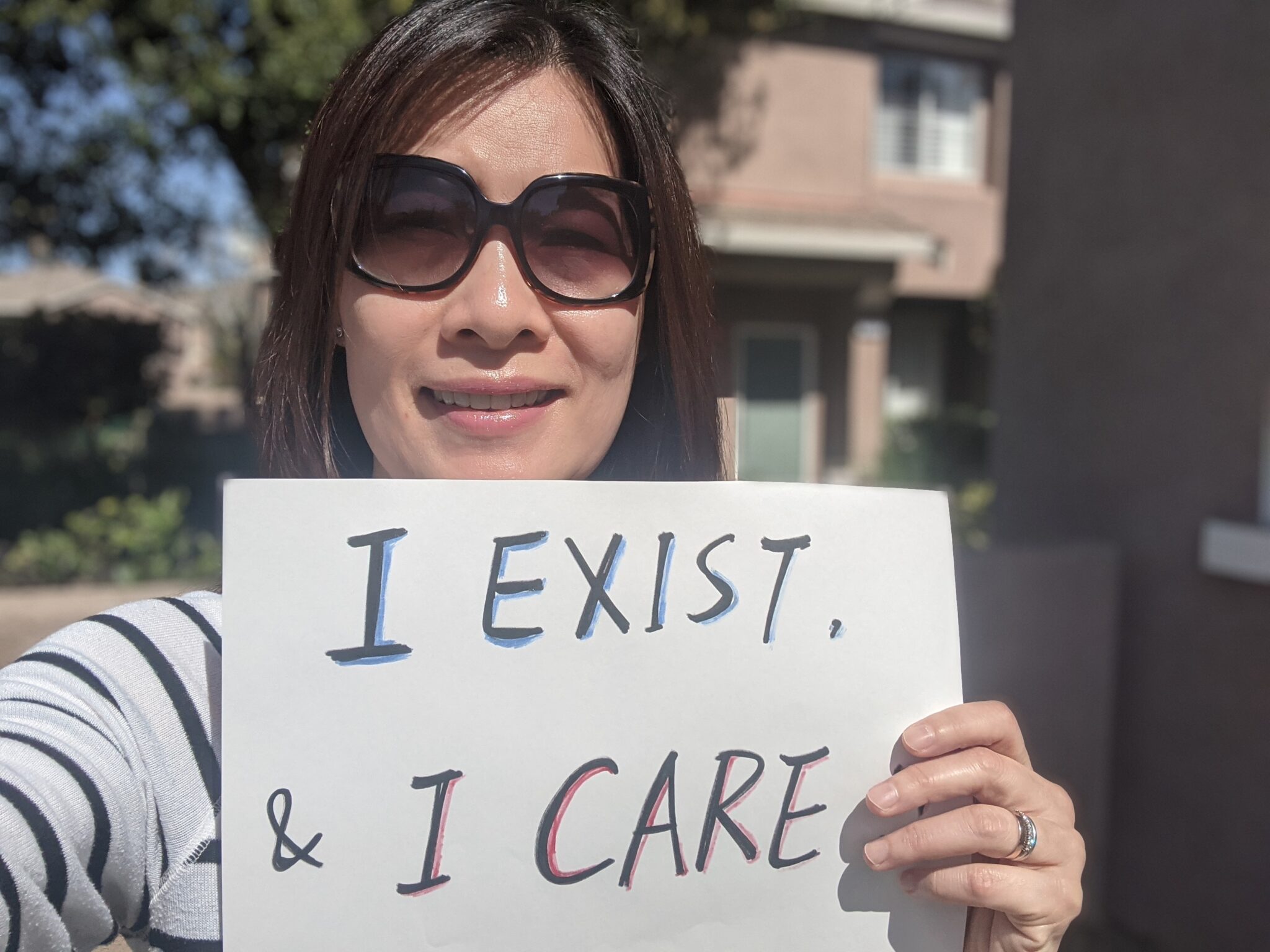 One of us is an immigrant from China, who became a naturalized citizen at age 36. It was infuriating to see the pandemic blame placed on China by the former U.S. president, but worse when she witnessed her neighborhood WeChat group discussing “China virus” or “Kong Flu” during the election season. Among many former president’s supporters, one said, “but the virus really came from China, what do you want him to say?” This person decided that the former president’s words were only funny, and bore no effect on anti-Asian hate crimes. This minority- enabled white supremacy is a reminder of such intersectional complexity in this country. Our rage is mixed with the difficulty to unearth the complacency and make sense of it. But even with this intense rage, Asians are constantly regarded as irrelevant in American society, as Cathy Park Hong says we have struggled to prove ourselves into existence.

The Bay Area is known to be a melting pot of cultures, yet growing up as a Vietnamese American, one of us has had less than three encounters with an Asian principal in elementary, middle school, and high school. Even in higher education, there are only two percent of Asians Americans holding college presidencies. Can schools really call themselves diverse where there are scarce statistics that indicate Asian Americans as leaders in the higher education administration? A lack of representation is also a form of violence.

This person currently works in higher education administration, where it has been a struggle fighting through a bamboo ceiling that unjustly boxes them into stereotypes: meek and uncharismatic, yet competent and overachieving. Because of these stereotypes, the bamboo ceiling is set to impossible heights. Their resume notes a Master’s degree in Justice Studies and a list of published works – a strategy used to help them further their career. In reality, there lies an expectation to be and do more because anything less is unnatural. Their rage is a culmination of insurmountable pressure inscribed on to Asian bodies.

Recently, it looked like things were changing. After working in their current department for four years where they did everything right as they were told, they were encouraged to apply for a permanent position, and even forfeited other promising opportunities to work in this executive leadership position. Finally, all the hard work would pay off…until the rug was pulled right beneath them over a writing prompt; they no longer met their standards. Where did they go wrong?

“They didn’t know their audience”

Moving up is never about hard work. It’s about fitting into someone else’s image. Being a young Vietnamese woman in a leadership role breaks every part of this mold. 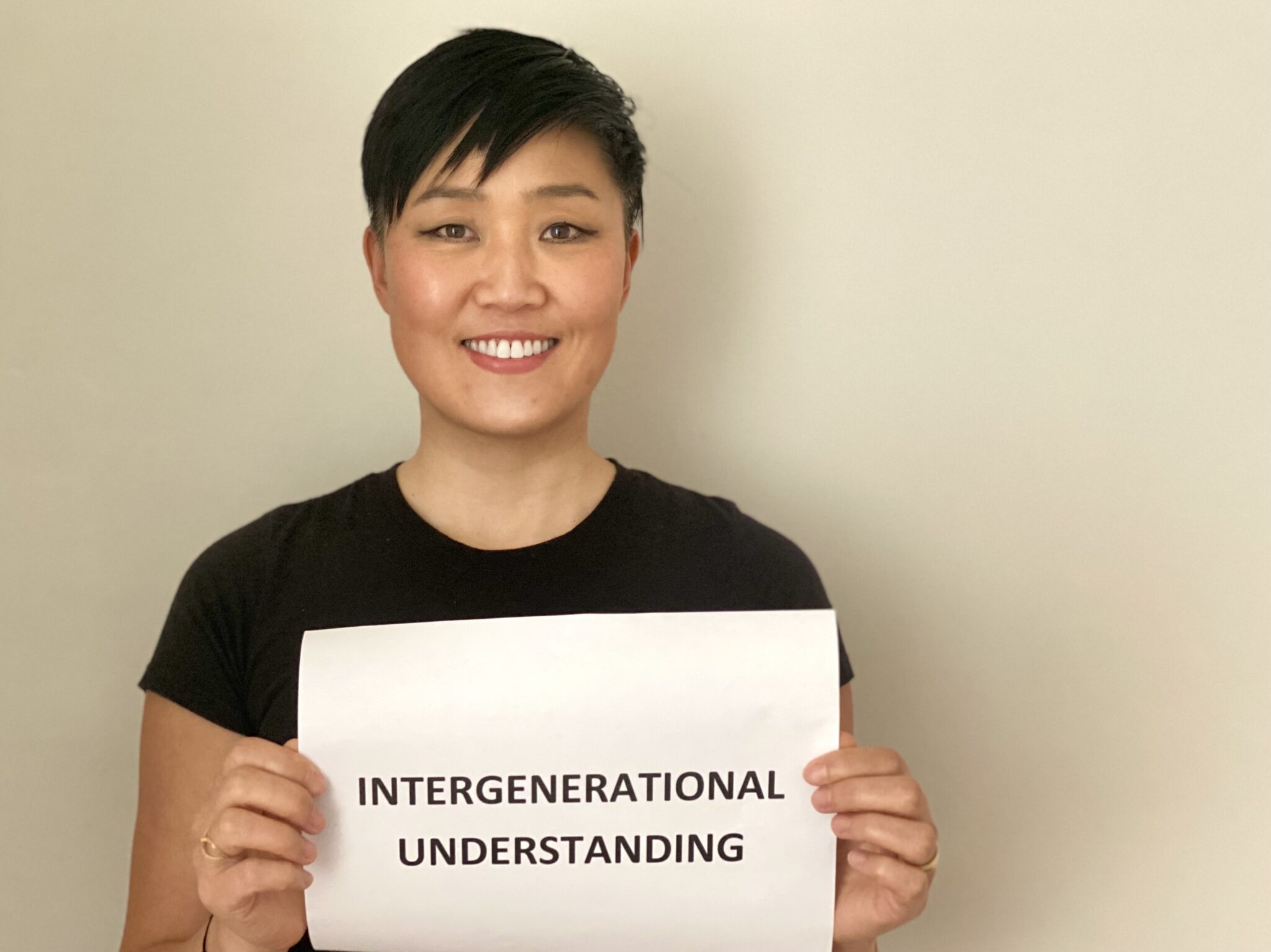 One of us is a naturalized American citizen, who grew up 20 years in Korea and has lived another 20 years in the U.S., remembers spoken and unspoken messages from her family, society, and culture, such as “Be quiet.” “Don’t speak up.” “Don’t be different.” “Don’t be difficult.” Those voices continue to play a role in personal, professional, and social interactions in her daily life. Living in two different cultures brings enrichment by the ample cultural experiences; at the same time, exhaustion when two cultures, the U.S. dominant and Korean cultures, collide.

While Asians and Asian Americans represent diverse populations in terms of culture, ethnicity, and language with varied historical experiences in the United States, it is crucial to understand the generational gaps existing within the Asian community. How rage is expressed can vary from generation to generation.

With all that we are up against, it’s challenging to be vocal about anti-Asian hate. This is precisely why the four of us, as Asian American women educators — right here and right now — jointly express passion in our classrooms and beyond. We reveal nuanced and humane stories individually and collectively. Though our experiences are distinct, we are bound by one thing: RAGE. As a collective, we cannot keep our traumas buried. We cannot brush off ignorant, racist accusations. We cannot continue to overlook the minuscule numbers of Asian American leaders in higher education administration. We can no longer ignore the generational differences within Asian communities. The role of the model minority that we have been conditioned to play ends here. 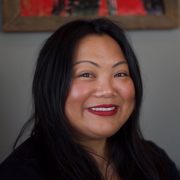 Joanne L. Rondilla is an assistant professor of sociology and Asian American Studies at San José State University and a Public Voices Fellow with The OpEd Project. She is the co-author of Is Lighter Better?: Skin-Tone Discrimination Among Asian Americans and co-editor of Red and Yellow, Black and Brown: Decentering Whiteness in Mixed Race Studies. 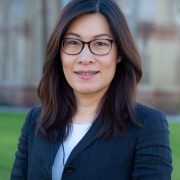 Ching Ching Tan, MA., is a Lecturer in the Department of Communication Studies, an MFA candidate in Creative Writing at San José State University and a Public Voices Fellow with The OpEd Project. Her memoir-in-progress is called NATURALIZED. Follow her on FB page and Twitter. 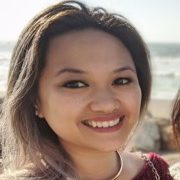 Katrina Tran has been at San José State University for over four years. She has lived in the Bay Area, CA all her life. She graduated with a Master's degree in Justice Studies. In her spare time, she enjoys gardening and yoga. 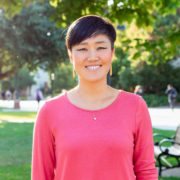 Kyoung Mi Choi, Ph.D., is the author of the memoir, The Child Behind The Bushes. She is an Associate Professor in the Department of Counselor Education at San José State University, and a Public Voices Fellow of The OpEd Project. Check out her blog: Courageous and Boldly and follow her Twitter.