Juneteenth: Salute The History and Science Of Its Origin

U.S. Secretary of State Antony Blinken has spoken out about the unprecedented immigration challenges at the southern border. And yet, Rep. Henry Cuellar has said that the White House pays too much attention to “immigration activists” in regards to deportation policy. These statements once again highlight America’s gap in understanding towards the complexities of immigration, and especially the limited understanding of what it means to be an immigrant or the children of immigrant parents.

Born in the 1980s in Dallas, Texas, my first language was Mandarin Chinese. My parents spoke the language and, because my mom had not yet learned English, their few friends were also Chinese or Taiwanese speakers. I was surrounded by Chinese family and friends and Chinese food for every meal. There were Chinese games and television shows bootlegged from VHS tapes. Chinese holidays, traditions and superstitions were the norm, and Chinatown was my childhood domain where I roamed free with other Chinese kids.

I was so fluent in Chinese that my parents were praised and complimented by their friends and other Chinese speakers with comments like, “Wah, she couldn’t have been born American!”  Even as a preschooler, I knew enough to be smug about my Chinese fluency. And while I understood there were people of different colors and backgrounds in the world, I didn’t comprehend that they could be speaking different languages.

It was my first grade year when a teacher told my dad that I was behind in language skills and, if my parents didn’t start speaking to me in English at home, I would have to be sent to ESL classes or possibly held back. “That’s your job,” my dad stubbornly responded to my teacher. “English is for school, Chinese is for home.” Then, he took me home and plopped me in front of the PBS channel on television, where I would sit and watch for hours. I soon became highly proficient in English and was named the best speller and writer in our first grade class.

The more I assimilated to American culture through school, my family conversations at home were skewing towards “Chinglish,” Chinese language mixed with English words. My parents stopped putting as much effort into the Chinese holidays and traditions that we had been so diligent about in their first five years in the U.S., opting for their own versions of Thanksgiving (roasted duck instead of a turkey) and Christmas (a simple plastic tree, some colorful lights, and single present for each of their two kids).

Every other summer, we visited my mom’s family in Taiwan.  As I got older, the culture shock grew with every trip “back”  to the States. In Taiwan, bathrooms and rules of traffic functioned differently. I couldn’t casually read signs or browse for store items. The smells and ambient noises seemed weird,the lighting looked slightly wrong and watching television programs that didn’t use English language was discombobulating for me. Over time, my knee-jerk reaction as a preteen was to convince myself that “cool” America was better than “weird” Taiwan. I still try to remind myself to have grace for young me, ignorant of both the world and my responses, but it’s hard to look back on those days.

Before I was married, I made a trip “back” to Taiwan with my then-fiancé so that he could meet my aging and ill grandmother and other family and friends. I was giddy with excitement to show him around and share my favorite foods. I couldn’t wait to take him to the locations of my favorite childhood memories; the 7-11 where I would buy snacks, the arcade, and the night market. But in the quiet moments, I realized my heart was yearning. There was this intense fondness and pride in sharing these things with the man I loved, but there were also things I couldn’t fully describe – gaps in my own understanding and phrases that I couldn’t translate. It felt as if I was always reaching for something, like stretching my arm so far that a muscle might cramp up or rip, reaching towards a distance that forever stayed just out of reach.

My identity was, and still is, cracked. I am trying to fit a Taiwanese-Chinese square into a round American hole. Despite my adult efforts to fill in the cracks by leaning into my Chinglish heritage through food, popular culture, and practicing my now broken Chinese, there is a void and a longing for a parallel life that I cannot yet heal.

It is unlikely that I’ll ever feel Taiwanese-Chinese enough. My parents mock me or are surprised when I understand certain words or phrases; and it is even more unlikely that I’ll ever be fully Americanized. With all that being American seems to entail these days, I am unable and unwilling to erase the ethnic parts of me, physically and mentally.

I’m a mother now, with children of mixed Chinese and Filipino descent, and my heart tightens when I wonder if they will feel disconnected to their heritages the way I do to my own. Maybe they won’t notice, or maybe culture and heritage will mean something different to them. My attempts to teach my children about being Chinese and show them where Taiwan is on a map, all while explaining why mommy cares so much, are my attempts at self-healing.

As I lay a foundation for my children, I hope that when they’re feeling lost and disconnected, when there’s an echo of themselves that seems just out of reach, they can rest on my meager quilt of kind-of Chinese and kind-of Filipino experiences and take some time to acknowledge and accept all the pieces of their lives as one whole. 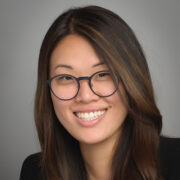 Tina Lin is a Public Voices Fellow of the OpEd Project and the Deputy Chief of Staff at KERA, the NPR and PBS-affiliated public media station covering the North Texas region. She is also a former attorney with a background in nonprofit grantmaking, donor engagement, and project management. She is the eldest and only daughter of Taiwanese American immigrants, mother to two half Chinese and half Filipino boys, and is still looking for her community.