Throughout the film the only Chinese or otherwise Asian community in Mika’s life seems to be Yang (Justin H. Min), a technosapien- functionally an intelligent robot with flesh whose body presents as a Chinese male. Yang is not just a techosapien, it is a “cultural techno”. It was bought to play the role of big brother, caretaker, and racial mirror to Mika, the adoptee.

One of the pre-eminent concerns of “progressive” hopeful adoptive parents looking to adopt transracially / transnationally
is the presence of racial and cultural mirrors for their dis-and-re-placed adoptee.

By way of research and personal testimony of adoptees we know that counter to what the adoption industry has propagandized us into believing- love is not the only necessary ingredient in a family constructed through the use of transracial/transnational adoption. We, as adoptees, like all humans, must also be imbued with a sense of who we are and can be racially , and culturally. This is all the more important given that in the United States we live in a racist and xenophobic society.

In After Yang, the racial mirror robot malfunctions and is on the brink of robot death. Jake brings Yang first to an Apple Store equivalent but they won’t repair Yang because Jake purchased Yang from a 3rd party vendor- offering only to replace him. In response, Jake finds an outlaw techno mechanic named Russ (Ritchie Coster) that can help him save Yang. When Jake enters the garage we meet Russ, a white nationalist; possessing an American flag with the slogan “ain’t no yellow in the red white and blue” and a poster that reads, “Yellow Peril”.

In a racist and xenophobic society everybody, everyday is exposed to, and consumes messages of who “the other” is, and their place in said society. Yang, the dying Chinese Male presenting cultural techno is meant to bulwark Mika, the adoptee, from the very same kinds of othering messages that are displayed and embraced by the man whose job it is at that moment to revive Yang.
The film subtly acknowledges the inherent racial and cultural displacement of transracial / transnational adoptees but for the most part doesn’t comment on it beyond prescribing a solution: Yang.

Yang is programmed full of Chinese fun facts, and in addition to racial mirroring he also performs the emotional labor of helping Mika reconcile her status as a transracial/transnational adoptee.

In a visually gorgeous garden scene Yang likens Mika’s adopters’ to a tree and her to a branch that was grafted in, an apparent other that now belongs.

But, what is the adoptive family to do when the adoptee’s primary connection to her cultural heritage- a robot- is dying?

The film wonders what this death means for the family insofar as the parents being workaholics; so who will raise Mika- but not much wondering how Mika will learn who she is and can be in a family that first placed the responsibility of teaching Mika her culture on a robot.

In the 1972 Position Statement On Trans-Racial Adoption, the National Association of Black Social Workers write, “Ethnicity is a way of life in these United States, and the world at large; a viable, sensitive, meaningful and legitimate societal construct. This is no less true, nor legitimate for Black people than for other ethnic groups. . . The family is the basic unit of society; one’s first, most pervasive and only consistent culturing life experience. Humans develop their sense of values, identity, self concept, attitudes and basic perspective within the family group. . . Only a Black family can transmit the emotional and sensitive subtleties of perception and reaction essential for a Black child’s survival in a racist society. . . white parents of Black children seek out special help with their parenting; help with acquiring the normal and usually instinctual parental behaviors inherent in the cultural and psychological development of children. It is tantamount to having to be taught to do what comes naturally.”

Though the film is titled “After Yang”, it does not concern itself with Mika and her racial identity formation after Yang nor is it gutsy or honest enough to explore how the construct of race intersects with the desire of (hopeful) adopters and how both mechanisms can impede and obscure the life trajectory of a transracial/transnational adoptee. In After Yang, Mika is expected to trust her adopters to do the work they bought Yang to do- but can they be trusted? Is goodwill virtuous enough to parent Mika the ways that she, like all transracial/transnational adoptees need to be parented? I don’t know.

It’s important to note: the adoptive parents have real races (Black and white) but the bot doesn’t. It’s Asianity is a product of programming and the decomposable flesh that encases it’s circuitry.

It’s racialization is a wholly performative service to the adoptive family.

In the adoptive family’s decision to delegate the task of saving Yang to Jake, he embodies the contradictory role of both the White Savior, and the head of the family that introduces racial isolation and racial identity precarity to Mika in the first place, which, quite frankly, reveals the practices of White Saviorism already so prevalent in transracial/transnational adoption.

After Yang does this revealing without ever asking the big question: How do you save someone from yourself? 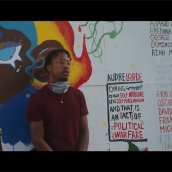 matthew charles is the host of little did u know, a podcast that centers the lived experiences—the learned and inherited wisdom—of transracial adoptees. His is also an essayist, poet, and sometimes actor whose work explores (dis)placement, belonging, and colony. Support matthew's writing on venmo: @matthewcharlespoet