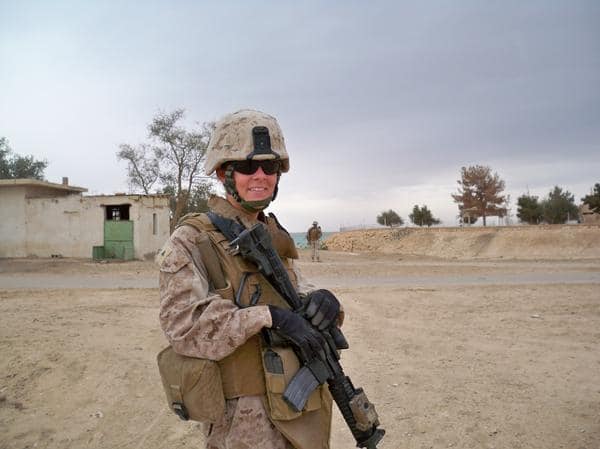 When I was eight years old, I stayed up late watching Adult Swim on The Cartoon Network and an army recruitment commercial bobbed up to the surface. I made the decision then that the military would be my career.

Ten years later, at age 18, I went to Marine Corps Recruit Depot, Parris Island. The government sent me to Camp Lejeune, North Carolina where I was stationed with the 8th Communication Battalion as a Field Radio Operator and spent the next 5 years calling it home.

The next year I deployed in support of Operation Iraqi Freedom, stationed in Camp Al Asad. I grabbed my two sea bags, and backpack with my rifle and walked straight into the Middle Eastern heat to sit through a safety brief and collect 180 rounds of ammo. 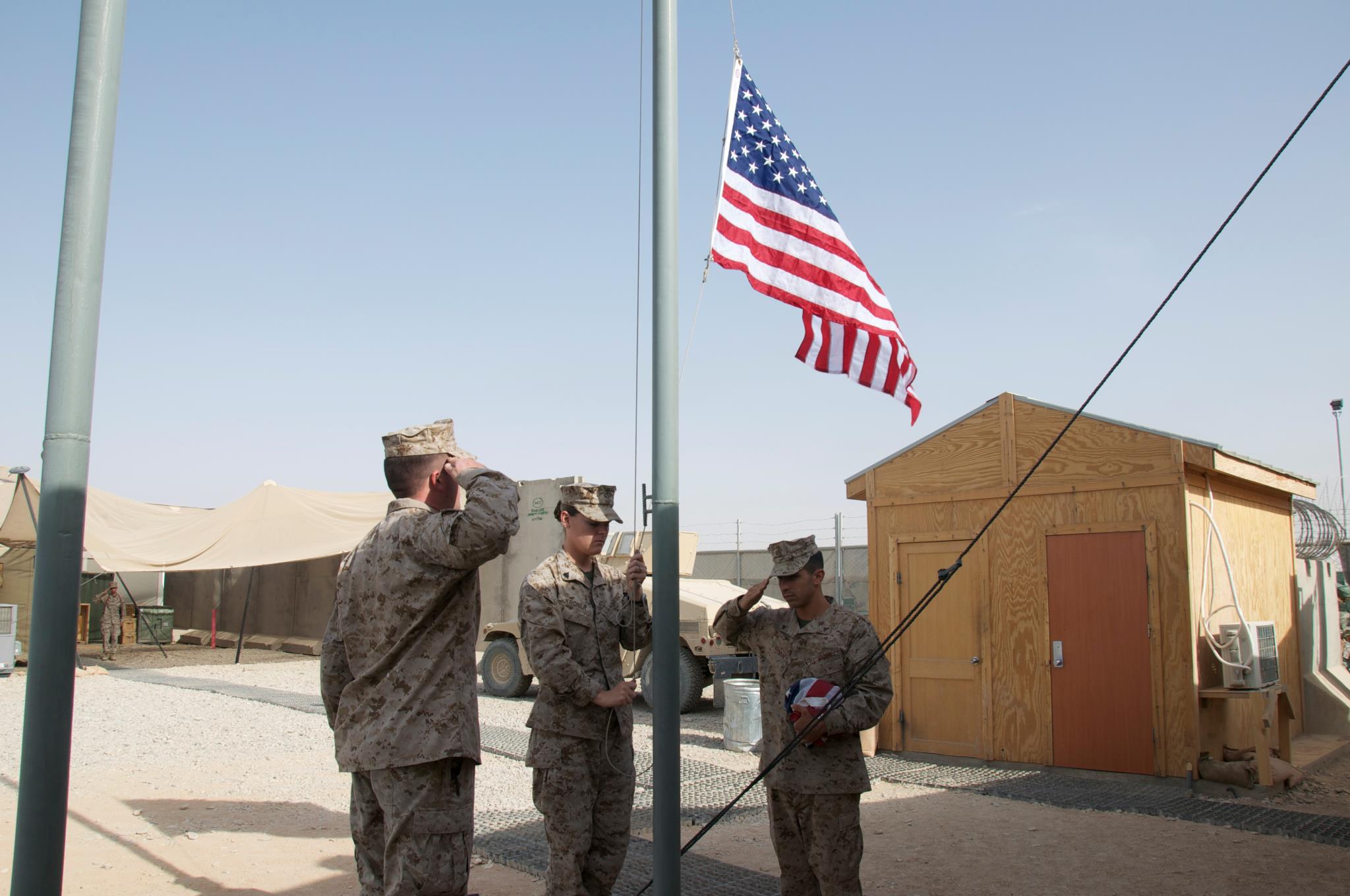 Life quickly became routine. I lived chow to chow, with 12 hours of work in between. When I got off I would skim my emails for any news back home. My friends and family wrote but a certain monotony set in. There was never a cloud in the sky, usually a blessing but I missed Mother Nature’s mood swings. Everything around me was tan, from the camouflage uniforms to the tents that housed us, compared to the colors of barbecues and brunches back home. The life and death stakes I faced seemed incongruous with my friends’ complaints about grades or whether he just wasn’t that into her. The only thing that wasn’t stultifyingly consistent was the wifi. It was spotty so I wasn’t able to keep up with current events.

I became a Lioness — Team Lioness is where female service members accompanied male troops on patrols and conducted house-to-house searches. I and another woman were attached to the 1st Battalion 8th Marines at Al-Taqqadum Air Base, an all-male infantry unit.

It wasn’t the guys who traumatized us. It was the boys. One, not more than two years old, only wore a shirt. Filthy, feet cut from running around outside without shoes, this child unnerved me. He was so malnourished that his belly swelled to a size I couldn’t imagine.

Then it was the girls. When I went out on ground patrols we would often go search peoples homes and it became the norm to learn that they had been married off as children and now raising kids of their own.

Children ran to our vehicles in hopes that we would be handing out bottle water, yelling “al-maa, al-maa”— it means water — as their hands were raised above their head. Their local water source was stagnant and smelled. At any point of the day you would see locals getting buckets to bring back to their homes to be used for cooking and drinking and just a few yards down you will see locals bathing or washing their linens.

After my stint as a Lioness, my unit sent me home for two weeks to spend time with family and I couldn’t manage daily life even on this quasi-vacation. I would wake up and immediately reach for my weapon only to realize it wasn’t there. Conversational impasses popped up everywhere; I couldn’t even make small talk anymore. The fireworks that decorated that 4th of July sky and reminded me of what I was fighting for kept dragging my thoughts back to the squalor I witnessed.

I didn’t see those changes in me as the signs they were and the traditional signposts that one’s life is progressing — proposals, marriage, children — told me there couldn’t be that much wrong with me.

Between my first and second deployments, I got married to a man whose daughter I eventually adopted. I had a sense of foreboding; before I got there, another Marine, Sgt. Kevin Balduf, was killed when an Afghan policeman entered our chow hall and opened fire killing him and one other. My entire second deployment was dotted with silence; times when communications had to cease until the family members of someone who died were notified. It seemed like there was always a hold on connecting back home. That’s how many service members and NATO allies died in the line of duty.

Even preparations for the downed lines of communications tried me. The chaplain started a program where parents could pre-record reading a book for their children.

I was mid-read of a book I can’t remember when a mortar hit near the building I was in on-base causing the camera to shake and the various stuffed animals behind me to fall. I had to record over it, but nerves made me skip a page, a flub that my daughter, with her observational powers already heightened by living with me back home, didn’t miss. She also didn’t miss the opportunity to tell me how the results of my scare disappointed her.

A homecoming should have been a relief but instead, I was constantly on guard, easily upset, feeling emotionally cut off from my friends, and had difficulty sleeping. I was relying more on my husband and my military family and less on my parents and siblings; the people who knew me before could discern the change in me. I needed to stay around people who knew the new me — and thought that person was functional. Those who knew the old me would have seen right through me.

I made the decision to leave the military in 2015 but not for what should have been the obvious reasons. I wanted more money than when I was in the Marine Corps, or at least that’s what I told myself.  In retrospect, it was because I knew I couldn’t survive when every day was awash with trauma.

It took months for me to find work, and during that time my husband, kids, and I struggled in ways I’d never imagined as that eight-year-old girl sneaking glimpses of late-night television. We were living off food stamps and government subsidies. We stomped through second-hand stores because we couldn’t afford new school clothes when September rolled around.

I finally found work and had to uproot my family to Illinois. It was a good bet, financially speaking. But as my family grew more secure money-wise, I became more emotionally unstable.  On the outside, I was smiling, but inside I was developing pathologies.

Intrusive thoughts marred every waking hour. Did I lock the door? What was that noise outside, an intruder? I shouldn’t have told my boss that…It’s like my brain wouldn’t turn off.

When I would finally get to sleep I would have random flashbacks of me standing on the tarmac at Camp Bastion late at night, smelling diesel fuel and burn pits as I watched the caskets of fallen service members being loaded into the back of a C-130 for the dignified transfers. Even in the Chicago cold,  I could feel the heat on my face.

The thing about trauma is that it’s contagious. My oldest daughter was depressed and struggling with anxiety, while my husband and I were constantly arguing about everything from raising our kids, to how we were spending money. He thought that I was too sharp in my parenting and I needed to remember that they were kids, not adults. I wanted to save as much money as I could and didn’t want to spend money on things like a vacation where we could have reconnected as a family.

But that was subterfuge. The real beef in the family was that I was never really home. I may have been sitting on the couch next to them but I was hardly present.

I’m not sure if it was fate or luck or what but a headhunter approached me to come work at the Road Home Program (RHP) at Rush University Medical Center in their Outreach department. It was only in educating others about their PTSD that I realized that it was that condition that had plagued me and my relationships for years. That old saying that those who can’t do, teach is all about me. I couldn’t heal myself of my PTSD — mostly because I couldn’t see it — but was explaining the condition to other veterans.

As it turns out, mentoring is a mirror. I saw myself in the people I was hired to lead out of their suffering.

I still marvel at how the insight I needed found me in my attempt to outrun it. Ever since I was a child, I thought I would outwork my problems, and out-earn them. Yet it was my work that forced me to figure out what was happening to me and my family. 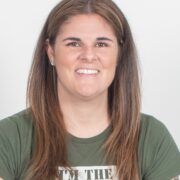 Ashton Kroner is the Veteran Outreach Manager at the Road Home Program of The National Center of Excellence for Veterans and Their Families at Rush Medical University and a Public Voices Fellow with The OpEd Project.