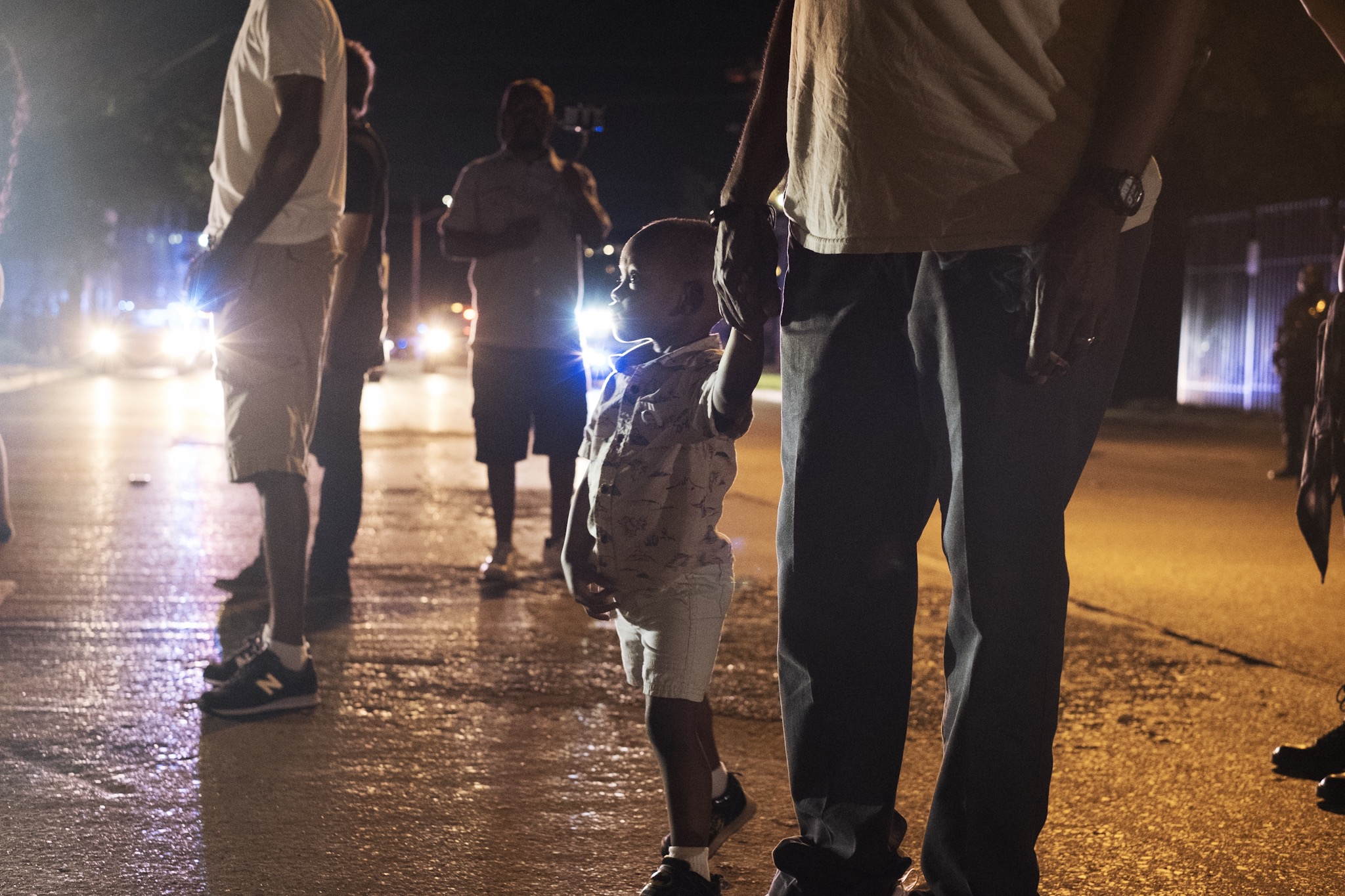 As I trek my usual trail in Rochester, NY, I see golden leaves pressed to the ground. A memory tucked away returns to me—my nephew, a gentle, bold, black boy the color of offense in Birmingham, AL, chasing falling leaves before they landed upon the ground. Falling black bodies and representations of our lives are perennial.

On the 4th of July, a witness reported a local Frederick Douglass statue laying on its side 50 feet from its pedestal grounded where slaves once traveled the Underground Railroad.

Critics said the vandalism was an unsuccessful rebuttal of Douglass’ “What to the Slave is the Fourth of July.” Douglass, in one of the most poignant lines, declared “This Fourth July is yours, not mine. You may rejoice, I must mourn.”

Mourning is in order as the violence over the recent July 4th weekend claimed the lives of Black children in Chicago, Atlanta, D.C., Birmingham, and Minneapolis reminding us that Black children “are 10 times more likely to be killed in a gun homicide than white children.”

I think of them lying on their sides—Jasean Francis (17), Charles Riley (16), Natalia Wallace (7), Secoriea Turner (8), Davon McNeal (11), Royta Giles Jr. (8) and Baby Columbus (five months within the womb delivered by her mother Laneesha Columbus.) She died from a gunshot wound a block from where George Floyd endured 8 minutes and 46 seconds of the agony Douglass described two hundred years ago.

I think of Trayvon Martin gazing upward with his ankles crossed as if a nail could hold them to a cross, of Michael Brown pooling in his blood beneath the scorching sun for over four hours, of Tamir Rice lying upon the ground, of Ayana Stanley resting on her grandmother’s couch. Their dwarfed time on this earth reveals our failure to be active witnesses.

More is required of us as Americans. We must become, en masse, voting witnesses, policy-changing witnesses, equitable education and wealth witnesses, and beyond. July 13, 2020 marks seven years since the jury’s verdict caused greater mourning over Trayvon Martin’s death.

Where 81.32965°W coordinates with 28.79295°N lies Sanford, Florida. These are the coordinates of inexplicable hurt: 7:16:55 p.m. February 26, 2012 is—at once—an ordinary and extraordinary break in time with the murder of Trayvon Martin. With each telling and retelling and return to this national mausoleum, there is a dance with trauma, with memory, with the resolve to break through the hurt.

Earlier this year on February 5, 2020 Trayvon Martin became a vicenarian at the age of 25 (the same age as Ahmaud Arbery and close to the ages of Elijah McCain and Breonna Taylor). To his mother, Sybrina, Trayvon is “forever 17.”

Twenty-five years culturally stands for a silver jubilee. However, the traditional definition of a jubilee is just as important to raise in the context of his life. With the horn of a ram, a celebratory blaring announced the Year of Jubilee for Jewish families after the completion of seven cycles of seven years.

As the people transitioned into the 50th year, they were to restore the ecology by resting the land, to return seized lands to the original owners, to forgive debts, to free the enslaved—equality was re-established.

In the Black American context, jubilee hails this vision for an end to cyclical pain and suffering as well. Margaret Walker’s historical novel Jubilee serves as the best example. Since its publication in 1966, the work has never been out of print in its 50-plus year existence and celebrated its jubilee in 2016.

The work illuminates Walker’s 30-year excavation of the history of her great grandparents, Margaret Ware Duggans Brown and Randall Ware. The Wares started a family only to have it separated by a slave owner’s tyranny and the Civil War.

The novel concludes with a reunion between the two, but this reunion is one of troubling redemption. After the War, Vyry, as Margaret is named in the novel, eventually remarried and chose not to reunite with Randall, a free black man forced to separate from her and his smithy before the war.

This narrative arc of the violent separation of Black American families and the consequences extends itself to the current era: the leading threat against black children’s lives is gunfire.

Recently I googled, for the sake of audacious hope, “things Trayvon Martin liked,” and the majority of the 669,000 results were reflective of the items contained in what Sybrina Fulton references as Pandora’s Box, or the evidence box the Department of Justice released to her three years after Trayvon was killed.

I wondered how a young, gifted, black American boy’s preference for hoodies and Arizona Watermelon Fruit Juice became the lasting public memories of his life. The otherworldly 54 or so rainbow-scattered candies from Mars pinned in our minds were for Chad, his father’s soon to be stepson, and, perhaps, an etymological sign his life was a game within this American landscape..

Before a decade review or a silver 25th review, we should arrest the cyborg of performance over time within us all: when death comes, we are movement bound. Although emotionally healthy to a certain degree (even Sybrina Fulton notes she could not stay locked in the moment of upending grief after Trayvon’s death), this momentum also can lead to ruin as we come to discover in the aftermath.

Politicians received public rebuke for memorializing Trayvon on his birthday. Apparently, even Sybrina Fulton and Tracy Martin’s written memorial to their son, Rest in Power, was offensive and cause for a civil lawsuit. We must bear witness—yet again—to the attempts to laden black families with the silence imposed by wrongdoers and those of us who unwittingly disavow the responsibility to bear the testimony that our black American boys, that our black American children are not threats.

We remember: Trayvon ravenously ate Ramen noodles and oatmeal, like other children. His favorite subject was math. His most cherished meal—steak and mash potatoes. Even in balmy Florida summer weather, hoodies were in order for him. One of his hobbies was roller skating. He had a gift for building bikes. He desired to be a pilot and/or aviation mechanic after attending the Experience Aviation summer camp founded by the black pilot pioneer, Barrington Irving.

We remember: he chose baby blue for his prom colors, and instead of dawning shades with a hoodie for the camera, he looked forward to, as Tracy Martin endearingly remembers, posing for prom pictures in the baby blue. He worked odd jobs for friends and family in order to earn money to collect Air Jordans. He liked being driven to school by his mother. He knew the movement of horses after the family celebrated Fulton’s birthday on horseback. Avalanching stereotypes, he angled his brown nearly 6’ tall 140 lbs down ski slopes.

We remember: his nickname, Mouse, with gentle, generous hands shook out the pockets of Robert Burn’s dystopia that became the namesake for John Steinbeck’s famed novella. He called his mother, “Cupcake,” since he was nine because he thought she was so sweet.

He rescued his father, Tracy, at the age of nine, from a cooking fire that temporarily impaired his ability to move; responding to his father’s alarmed plea, Trayvon dragged him from the site of harm. He loved, also, his brother Jahvaris and other family members. His character led him beyond a taxonomy of social acceptability to extend friendship to Rachel Jeantel, someone whose voice brought to the surface the ugly skeletons of racism and ableism in America during the trial.

Perhaps, like Jeantel we are ready to become the witnesses our Black children require.  Perhaps—this time—we will do something to alleviate the continuum of black mothers, in anguish, pulled over on the shoulders of America’s highways screaming, as Sybrina Fulton did, “Why, why, why, why, WHY?!” They are in chorus with the five ways Toni Morrison recorded in Beloved, the critically acclaimed novel that voiced the trauma of enslaved African Americans.

There she posits the agonizing whys of Paul D, the former slave who lived the unspeakable, unspoken. Unsuccessful in fathoming a rationale for it all, he grieved: “Why? Why? Why? Why? Why?”

And to these reverberating why’s, I will add, when will we be worthy as a collective to witness and to challenge “organized decays?” When will America’s black children have a jubilee? Let it be as Douglass’ channeling of William Lloyd Garrison’s plea: “God speed the year of jubilee, the wide world o’er!” 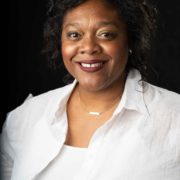 Althea Tait is an Associate Professor of African American Literature at SUNY Brockport. She is the co-editor of the collection of essays, I Die Daily: Police Brutality, Black Bodies, and the Force of Children’s Literature, forthcoming from the University Press of Mississippi.