On Equal Pay Day this month at the White House, President Biden mistakenly referred to the vice president as the “first lady.” While standing next to his wife, Biden commented, “There’s been a little change in the arrangement of who is on the stage because of the first lady’s husband contracting COVID.”

After some laughter from the audience, the president corrected his mistake – it was of course Kamala Harris, not Jill Biden, who was absent.

Biden’s gaffe could be considered a harmless slip of the tongue if it didn’t conform to a pattern: coded language that serves to delegitimize Harris’s influence.

Since Harris took office, news stories have repeatedly minimized or denigrated her role. The Los Angeles Times declared her the “incredible disappearing Vice President.” Publications including CNN and the BBC  have characterized personnel changes in the VP’s office as a sign of dysfunction, noting that many female staffers have left for other positions. Fox and other conservative outlets have run downright weird critiques, like the one where she was accused of using a fake French accent when speaking to French scientists.

However overblown or insignificant, these narratives are picked up and amplified by other institutions and social media. They gain traction because they tap into an American political narrative: to be feminine on a public stage is to lack power and legitimacy. Essentially, a quick way to minimalize political actors is to feminize them.

The Office of the Presidency is arguably the most masculinized position in American life. Americans are trained to expect presidents always to appear strong and to focus their attention on hard-power political maneuverings. This expectation is not inherently bad, but it becomes problematic when used as a weapon to delegitimize women in politics, either directly or through language that draws from stereotypical notions of what is feminine.

The use of this delegitimizing language can have real consequences for domestic and international policy. Take, for instance, a recent op-ed critiquing Harris’s trip in the wake of the Ukrainian crisis. Peter Lucas claims in the Boston Herald that Harris was “looking for love in all the wrong places” by meeting with Polish president Andrzej Duda instead of taking the time to “greet hundreds of thousands of refugees.”

There is nothing wrong with comforting refugees, except for the obvious logistical issues; however, there is something wrong in expecting that the highest and best use of the vice president’s time during an international crisis is to provide emotional support. Lucas’s premise – that Harris should have been taking pictures with fleeing women and children, presumably because she is a woman –  indicates gendered thinking. Yes, symbolism and human connection are important factors for any politician, but I don’t remember calls for Dick Cheney to drop everything else and sit with grieving widows in the days following the September 11 attacks.

What all the minimizing political narratives about Harris have in common is they are based on a false dichotomy of gender and politics. In my more than a decade of researching the nexus of gender, politics, and power, I have found this false dichotomy particularly daunting to extinguish. This is because it is pretty good at adapting. When Barack Obama assumed power, many claimed we were entering a post-racial age, a belief that turned out to be categorically untrue.

We must not make the same mistake now in assuming that an election that bore us our first female VP is a signal that gendered scripts are weakening. They are merely adapting, as narratives casting Harris in the role of first lady show. In response, we must adapt too.

During Women’s History Month, we celebrate the many ways women have contributed to our country. This year, in a political moment of having our first woman vice president, let’s honor her and others by countering language that relies on a false dichotomy separating women and minorities from legitimate power. 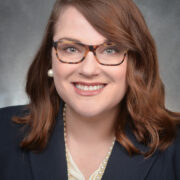 Stephanie L. Wideman holds a Ph.D. in Communication Studies with an emphasis in Rhetoric from Wayne State University in Detroit, MI. She received her M.A. degree in Political Science with an emphasis in Public Administration, and her B.A. in Communication with an emphasis in Public Relations from the University of West Florida in Pensacola, FL. She currently resides in Indianapolis, Indiana and is an Assistant Professor and Director of the Forensics Speech and Debate Team at the University of Indianapolis. Throughout her collegiate career she competed and then coached with several speech and debate teams. Her time engaging in this activity contributes to her research interests that lie at the nexus of argumentation studies, visual rhetoric, gender, and politics.