Black women who lead from the side saved our presidency, and they will most likely help save our democracy.

Thanks to the efforts of women like Stacey Abrams (political leader and voting rights activist), LaTosha Brown (co-founder of Black Voters Matter), Marilynn Winn (founder of Women on the Rise), and Nse’ Ufot (CEO of the New Georgia Project), Joe Biden and Kamala Harris won Georgia, and Democrats Raphael Warnock and Jon Ossoff won their Senate races. These Black women got it done by leading from the side, leading with more concern for the outcome than for who gets the credit.

After Abrams narrowly lost the 2018 Georgia gubernatorial race, she didn’t sit around waiting for her next opportunity to run for elected office. Instead, she founded Fair Fight Action, an organization to address voter suppression, and continued to fight for the betterment of the state and the country, working with grassroots organizations focused on re-engaging people in voter education and registration.

Through Fair Fight Action, Abrams created a playbook for organizations that work in the civic engagement space to fight voter suppression and ensure that more people of color were registered and informed voters. Abrams led from the side by respecting and working with community leadership that was already entrenched, providing counsel, support, resources, and tools to help them move towards a shared vision.

Another community leader, Tamieka Atkins, executive director of ProGeorgia, a state-based, nonpartisan voter engagement advocacy organization, uses the side strategy lead, working to equip nonprofit agencies so they could register voters in a more digital space and funding solutions that embraced seniors, people in rural areas, and those challenged by technology. For example, ProGeorgia supported efforts to send text messages while ensuring the text messages didn’t cost the recipients. Atkins chose to work beside these established community leaders, being available as needed and lending essential resources to the work.

Black women leading from the side is not new. As we roll through Black History Month and into Women’s History Month, we can recall many black women in civil rights and human rights history (Ella Baker, Fannie Lou Hamer, Dorothy Heights, for example) who engaged the strategy. Their involvement in the civil rights movement, which like society was fraught with sexism, often required that they find ways to gain legitimacy and make advancements in the segregated south and their organizations. Below are examples of how each civil rights woman led from the side.

Ella Baker worked behind the scenes with such notables as W. E. B. Du Bois, Thurgood Marshall, A. Philip Randolph, and Martin Luther King Jr. She helped found the Southern Christian Leadership Conference (SCLC) and the Student Non-Violent Coordinating Committee (SNCC). She provided leadership from the side by supporting and counseling and mentoring up-and-coming leaders, including Stokely Carmichael and Rosa Parks.

An SNCC organizer, and voting rights activist who co-founded the Mississippi Freedom Democratic Party (MFDP), Ms. Hamer, became a member of Mississippi’s first integrated delegation and attempted to run for that state’s House of Representatives. Eventually, she moved her leadership to the side by turning to economic strategies to aid Black farmers, such as founding the Freedom Farm Cooperative (FFC), which promoted collective land ownership and championed low-income housing programs.

Dorothy Height worked with the National Council of Negro Women (NCNW), where she focused on ending lynching and restructuring the criminal justice system. When she headed the organization, it financially aided several civil rights activists. Eventually, by moving her impactful leadership to the side, she made an even broader impact: regularly called to provide counsel to national leaders, including Eleanor Roosevelt and presidents Dwight D. Eisenhower and Lyndon B. Johnson.

One of the critical things about leading from the side is that a leader must be willing to relinquish their power position and share power when working with a community, whether a community of color, an affinity group, or coworkers.

Sharing power means releasing preconceived ideas about who and what is and who and what should be. Recognizing that other members of the collective may have good ideas for solutions based on their knowledge of the culture and valuing their insight about a practical approach are examples of leading from the side.

Senate inaction regarding Trump and the January 6th insurrection has also caused many to wonder how we save our democracy. We will save it the same way we regained the presidency—with grassroots activism centered on people leading from the side. To do that, more people will have to take some lessons from Black women who lead from the side. 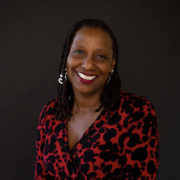 Sandra Barnhill is an attorney, nonprofit management consultant, founder and CEO of Foreverfamily (formerly AIM-Aid to Children of Imprisoned Mothers), a 34-year-old nonprofit that strengthens the bonds between children and their incarcerated parents. She is also an Encore Public Voices Fellow with The OpEd Project.