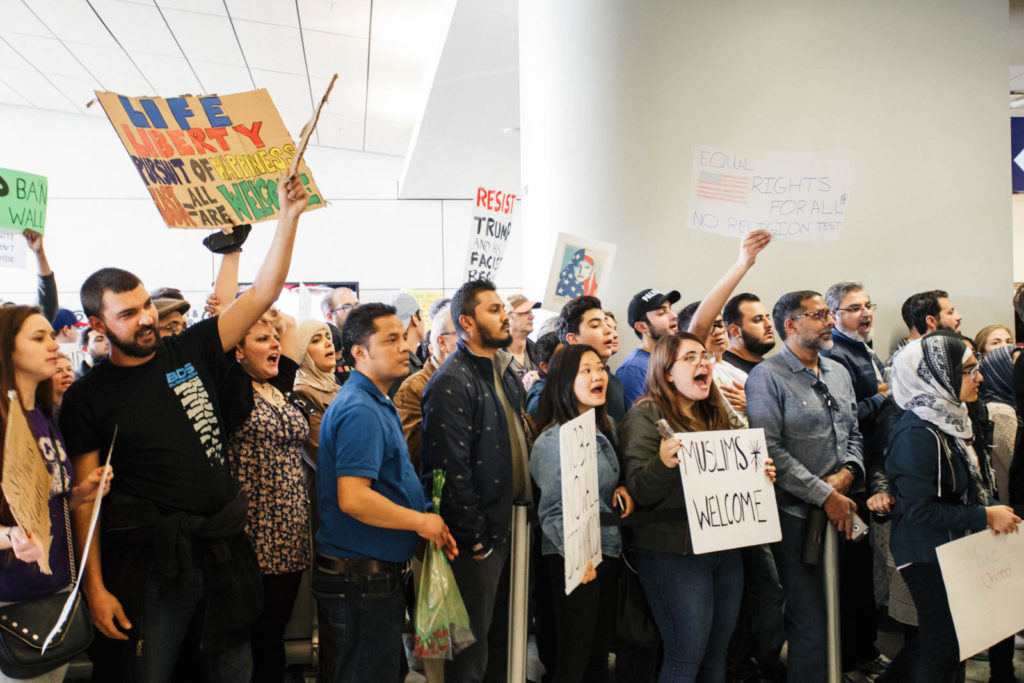 “It’s like Eid prayer at the convention center,” My eight year old daughter looked up at me as we made our way towards the bulging crowd of protestors at the Dallas Airport in early 2017. Beckoning us was the rhythmic chanting of “Hey, hey, ho, ho, the Muslim ban has got to go!” and “Tell me what democracy looks like, this is what democracy looks like!”

“Yeah, never seen so many people here,” I agreed as we squeezed into a spot among those flooding the international arrivals Terminal D. Several times, we had walked through these very gates after visiting our family in Pakistan.

There were throngs of supporters from all religious and racial backgrounds and from all around Dallas-Fort Worth. We saw many familiar faces and met people from social justice organizations. Community organizers giving updates intermittently, folks bringing snacks, pizza, soda and water to share. The chanting voices were ebbing and booming, keeping up with the beat of an Arab drum and with our heartbeats. Muslims performed the congregation prayer, as well. I felt ONE with all the supporters in a way that I had not experienced before. My heart elated and full with their affection and support, I felt stronger and more accepted. Honestly, I needed it so much just then…We all needed to feel this, to be one with so many. To be one voice in a chorus and not alone.

Coming to the USA, from a “well-educated” and “somewhat well-traveled” Pakistani family, I had never felt lesser or insecure in any way, nor did I think I would be unwelcome, in the remotest sense, anywhere in the world. Moving to America felt like beginning an exciting exploration journey. It dawned upon me very soon that living somewhere and simply visiting the place were two different things.

Most Americans, I met were friendly and helpful. Our neighbors were always smiling and polite…“They always know the right comments, the right phrases to say at the right time!” I marveled. Imperceptibly, I soon got comfortable using the once unfamiliar “how’s it going, not much, how about you? Have a good one” and sometimes even the Texan “y’all”, in an accent that is still very much Pakistani-flavored, and I cherish it. My kids find it a little interesting, though.

When I came to USA, I remember appreciating that people here are never snoopy or even curious about anyone’s clothing, other choices, comings, and goings; rather most of them were indifferent, minding their own business, which I could live with. It sometimes felt that existing behind these transparent barriers, in your own little kind of semi porous bubble, made life pleasant, spacious, and breathable. There were, however, some folks, I also discovered, in everyday interactions, who regarded me as different, even an ‘ignorant immigrant’ and I was always taken aback and frustrated by their subtle or obvious disdain.

It wasn’t the norm but it did happen at least once a month, here and there at some store or park or restaurant.

A cashier would smile and greet the various customers ahead of me with a welcoming “Hi, how you doing today?” They would laugh, share quick recipes, make small talk about the unpredictability of Texas weather, or even swapped funny anecdotes about their kids and partners. All the while, I would be listening in, watching their expressions with knots in my belly, wondering what the cashier’s reaction would be to me.

When my turn came, they would not even raise their heads to look at me. It felt surreal when they talked sharply or coldly, or gave me the silent treatment when they had been friendly or chatty with people before and even after me. I cringed and chastised myself for feeling the need to be welcomed and talked to, to be accepted, like everyone else.

“It reflects their mindset more than anything. Racism is their problem, not mine,” I would comfort myself.

Then I would chastise the silly me, “I am being petty, making a mountain out of molehill. Maybe the cashiers are just tired by the time they attend to me.”

These checkout lines reminded me of the immigration lines at airports, when you have to be patient even towards the sternest of immigration officials.

There were times when we as a family were ignored in not-too-busy-restaurants or in big city apparel stores for ridiculously long times and had to walk out after complaining to the manager. Once, there was a kids’ soccer team coach who was subtly ignoring us, throughout the season. How can we be sure? How did we know? Ask any person of color, and they will tell you that they can smell racism a mile away; It’s a human instinct, I guess, honed by experience.

There were a few instances, when people shouted profanities or mocked my hijab. Sometimes, they whispered ugly things in a store aisle, or screamed from their cars: “Go back to your country”. These instances were rare, and did not mar the friendliness and camaraderie that we experienced from most people, but like we say in Urdu that even one bitter almond can leave a lingering bad taste in your mouth.

For years, most friends from the same background as ours prescribed patience and kindness towards those who put one in unpleasant situations. “You are the ambassador of Islam, be kind even to those who mistreat you. Don’t do anything, don’t say anything, just walk away. They will see the error of their ways if you are patient and kind.” I saw the wisdom in their words and tried it but slowly I felt caged, artificial, suppressed. I grew exasperated and annoyed with this approach.

“I am not ready to be the ambassador of a whole way of life. Sometimes, I feel I can’t and won’t carry this burden with me when I go somewhere, meet someone. I can’t be on the edge that I will be judged and their opinion of Islam based on my reactions. Do I judge Christianity or Judaism by the reaction of one or even a thousand followers of a faith?

“I just want to be a normal, common human being and feel free to react in my most natural manner! Why do they want me get rid of my basic human emotions and reactions! It is unfair.”

I could not help myself and tended to react with a range of emotions as and when I felt. “Just like any other person,” I would tell myself. I would take it all quietly, patiently most of the time. Rarely, I would let my resentment pour into a few practiced words in a treble or even calm voice; I would walk away with my heart racing, my cheeks and ears turning a hot pink. … And then suddenly felt calm and relieved. I did not record on the phone, but felt vindicated, justified, elated, and victorious. If I am an equal American then I am an equal human too, with the same emotions and reactions, I was convinced.

For me, the airport rally in support of Muslims was a new chapter, a sigh of relief, a much needed catharsis, and I wanted to savor it with my family. I wanted my kids to be a part of this new shaping of history, so “we can all tell our grandchildren we were there”.

I remember asking a few supporters at the rally, “If you don’t mind, can we move up front please, my daughter wants to see the passengers arriving up close?” and they happily made room for us.

“Yes, she must see and remember all this,” An elderly woman smiled. “I came here as a child with my parents from Nazi Germany. I know what it feels like to be an immigrant. I remember it so well.” I felt I was face to face with history.

“I am so grateful to you and everyone here, joining in, it gives me so much hope,” My heart was bursting with love.
The protest continued until the evening when we all walked back knowing this journey will go on with many voices merged into one.

Then, this year, in 2020, amid the heartbreak of Covid-19 Pandemic, came the devastating killing of George Floyd and the unprecedented, world altering protests. We had been to some of the Black Lives Matter rallies and protests in previous years, and empathized with the pain, the centuries old, ongoing suffering and its impact of our fellow African Americans. We know we cannot truly comprehend what generations of African Americans have been through, but as a family, we hope to try to understand the tormenting history and harsh realities in every way we can.

My children are a bit older now since we went to the Muslim Ban protest at the airport and they are aware of the BLM and its significance. They read, talk, and think about it. Being with my children, in facemasks and gloves, at this year’s protests and hearing them raise their voices, “George Floyd, say his name”, “I can’t breathe” fills me with optimism for the future. They listened to the stories told by the participants and speakers, asked questions and shared opinions. They want to do their bit in amplifying the voices and to understand more.

We know that bigotry and racism in any form will have no space, no legs to stand on if people unite and struggle together. We hope to be on the right side of history and be the change, which always starts with you and me. 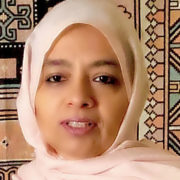 Uzma Rizvi is an artist and freelance writer from Dallas, Texas. She finds inspiration for her work in our shared humanity, nature and Sufi poetry.