The video depictions of racial terror are today’s “Strange Fruit.” We Shouldn’t Share Them.

When they divorce, they bisect me. Weeks with Mom, weekends and certain holidays with Dad. I’m sixteen. They say it’ll give me more predictability. Stability. The words you hear in every Lifetime movie or TV special about divorce, although without a psychopathic new stepfather or stepmother involved. A kid in high school needs both parents in his lives, they say in rare unison.

The side of me at Mom’s has a room, stocked with copies of Richard Yates, Nabokov, Joyce Carol Oates stories and novels, along with Tchaikovsky and Debussy CDs. The walls whisper in lavender. My sheets are soft moon and stars patterns. Mom says ambience is conducive to harmony. The closets are replete with Khakis and nice checked and striped shirts.

The side at Dad’s occupies a white room with an Army cot, punching bags, and soccer balls with black and white eyes. One small square window. Also, a closet full of sweatpants and white T-shirts, a TV, DVD player, and copy of Kindergarten Cop. Dad says it’s a perfect metaphor. There is no bathroom, Dad growls in an Austrian accent that sounds like a constipated Russian.

“How do you like the monster’s room?” Mom whispers when she picks me up.

“Does that bitch give you space?” Dad barks when I return for the weekend.

I say I like both places. But they dissect any pause, any frown. The slightest trace of a tear, a sigh. An arched eyebrow, an avoidance of eye contact. Mom always cups my face like it’s porcelain. Dad slaps me on the shoulder and gives wide, rough bear hugs, reeking of Old Spice, sweat, and hints of onions, his daily breakfast.

“Tell us the truth,” they say. “We want to make this easy as possible. You divorce spouses, not children. You know that.”
But at nights, they growl on the phone, voices rising through electronic walls, conveniently on speaker.

“Herman, you’re trying to turn him against me. He doesn’t answer questions. He dissembles. To his own mother.”

“Well, Penelope, you’ve turned him soft. Ideas, ideas. He needs to kick a few asses. You know what I did when I was his age? I beat up a soldier twice his size.”

“Do you want your son to be an athlete or some damn superstar?” Mom screams. “You were always Mister Macho, Herman, push, push, push. Do you know any limits?”

“Well, at least they make money, Penelope. They have some security. Some predictability. They’re always going to be assets. Even when they retire. Nick won’t want for a thing.”

No matter which side of me is where, the words echo on my walls, a fusillade of fucks, growls, bitches, motherfuckers, while I pull the sheets up more and more. Sometimes, one of them will come in and whisper a sorry, sweetheart or a don’t pay it any attention, old sport. But they’re words slapped onto my skin like a flimsy Band-Aid. They never sit down for a minute and ask how are you feeling? Tell me something about your life. One specific thing. Not even an everything will be all right.

“You’re sensitive,” Dad says. “You see, Nick? Just my point. Your mother coddled you This is why the marriage couldn’t work. And son, we’re not fighting. We’re just talking.”

“Talking really vociferously,” I say, taking a swig of my Coke.

We’re having a weekly parent-son lunch, all three of us together at Ramon’s, a place we agree has the best camarones a la diabla and fish tacos. Dad sits across from Mom and I sit between them. It’s six months into joint custody.

“Well, this is what I’m trying to keep Nick away from,” Mom replies, tearing a corn taco, piece by piece. “I want Nick to be well-rounded. And yes, sensitive, God forbid.”

“I’m not fighting. I tell the truth,” Dad says. He takes a long swig of his Corona and assesses me. “A little physical development’s what Nick needs right now. The world’s getting worse and worse. Do you want them to just walk over Nick?”

“Your truth is mighty thin.” She slaps the mangled taco down.

“Truth is subjective. Thank God you don’t have sole custody.”

I raise my plate over my head, like Atlas. I relish the weight, the power it holds, the weight of someone’s design and dreams. Mom asks what the fuck I’m doing. So does Dad. Put it down, put it down. Mom lunges for me and I pull away, slamming the plate down with force.

Pieces go shattering and shrimp, rice, and beans splatter all over Mom and Dad, like some wild, beautiful storm. They try to dab and wipe, but stains are clear. There’s a kind of odd relief, watching this scene, everything on full display, PA system playing some oddly endearing mariachi music.

The waitress rushes over, asks if everything’s all right.

“Just a little accident,” Dad says with a flick of his hand.

“No,” I say. “I threw this plate. Feel free to bill my parents for physical and emotional damages.”

“He’s just joking,” Mom says, trying to take my hand. The waitress surveys the scene, the furrowed brows, pursed lips, the fluttering eyes, the pieces of glass, then rushes away.

Of course, they start arguing over my behavior. Talk psychiatrists.

“Look,” Mom says. “I know it’s been rough. A good therapist will help you, Nick. Trust me on this one. A good one will help you unearth all sorts of feelings and stresses.”

“We’re not, old sport,” Dad says. For a moment, they exchange glances, thin, but connected, and I wonder if they might say something. Something kind, something small and good, some word of assurance. Mom even reaches out, as if she wants to assure Dad. Or me. Dad smiles and starts to tell a joke about a Titanic survivor walking into a bar. Mom’s even trying to contain a smile. But before he gets to the punchline involving copious amounts of ice, the waitress comes rushing back check in hand and their faces resume the old scowls and frowns.

I pick up fragments of plate, feel their sharpness. I wonder how tiny a fragment you can become after everything’s been split once, twice, a thousand times. Do they find ways to split the tiniest fragments too? Doesn’t anything stop?

Some nights, I dream of the biggest room available. A room in a distant city, perhaps. Perhaps in Europe, even. And I dream of picking every single detail, every CD, every pillow and sheet, every book. I want to read books that Mom hates, like Huckleberry Finn and to go bowling, which Dad thinks isn’t rough enough. I want a Gothic room, with elegance and arches. And I want a doorman to buzz Mom or Dad up. And I really want to insist that they make appointments to see me, to which I’d respond that I’m well booked in advance. But I might be able to see them with proof of good behavior. I want to pronounce the words with precision like some king, tutored by the best.

But there are too many words, swirling in my mind, like the soggiest of alphabet soups.

They ask me for a word to define myself. An adjective, a verb. Parent-assigned therapists ask me how I see my future. The shape, the scope, all of that. And truth be told, I just spout something, anything, arts, business, law, but too often nothing at all.

Silence is the one good, true thing that follows me through class, down afternoon streets and alleyways. She looks with me to the skies, to the windows where people laugh and move, their lives in motion, motion, more motion. She doesn’t comment when I try to insert myself into their familial portraits or when I try to snatch a real smile from some mother striding down the street or a child’s laughter, sandwiched between parents with perfection. Silence understands. I’m just another being among these people, something who looks whole. She walks beside me without a word, until I get to one home or another. Then she follows me with grace until my hand touches the doorknob. I slink inside yet again, waiting to be sliced even further, silence reaching, reaching, but of course, never able to get in. But silence hasn’t learned to give up. 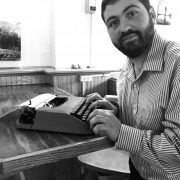 Yash Seyedbagheri is a graduate of Colorado State University's MFA program in fiction. His stories, "Soon," “How To Be A Good Episcopalian,” and "Tales From A Communion Line," were nominated for Pushcarts. Yash’s work has been published or is forthcoming in SmokeLong Quarterly, The Journal of Compressed Creative Arts, Write City Magazine, and Ariel Chart, among others.